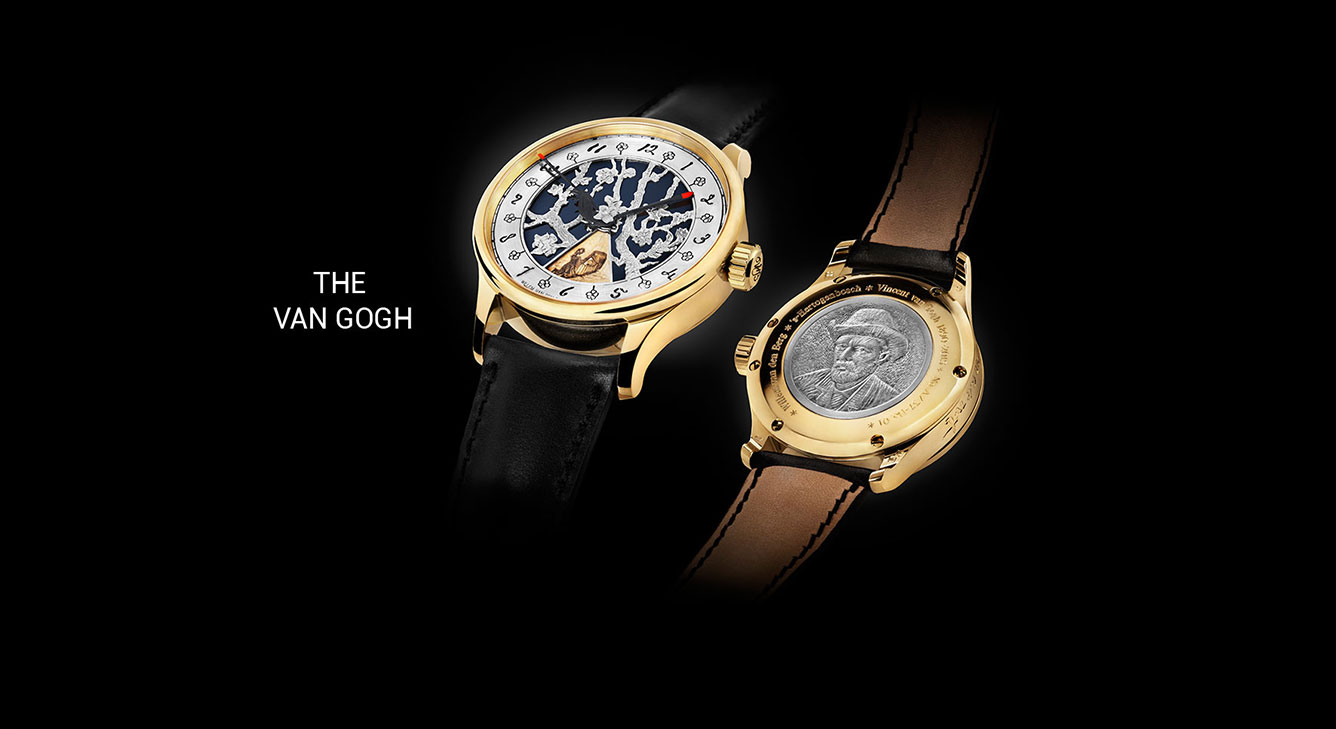 The year 2015 marked the 125th year of Vincent van Gogh’s death. As tribute to one of world’s most famous painters, Willem van den Berg has created and built a watch that tells the life story of Vincent.

Keeping this in mind, the watch can rightfully be called THE Van Gogh watch.

Willem van den Berg has delved into the life and work of Vincent Van Gogh. Never before has there been a Van Gogh watch, built with so many details and symbols in which his life and work are expressed. Hand painted fragments of van Gogh’s work are also used in the watch.

Because of the story behind the watch, this is not just a watch but a personal masterpiece. As can be seen on the day-plate where Van Gogh’s life story is told using seven phenomenal miniatures, hand-painted, sometimes with a single-hair brush. Vincent was born on Wednesday and died on a Tuesday. That completes the week. Given this, his life story is portrayed in 7 days of the week. Wednesday, the first day, is portrayed by a cradle, a drawing of his the Hague-period and serves as a symbol for his birthplace Zundert. Thursday is the Etten-period where he drew “The Sower” for the first time. On Friday Nuenen is portrayed. This is where he painted his first big piece, The Potato Eaters, but also the portrait of Gordina de Groot, called Sien or Dien. Van Gogh secretly had a crush on her. Saturday is the national holiday in France called “Quartorze Juillet”. He used colors for the first time when he was in Paris. On Sunday we are in Arles, where he painted his first sunflowers. We see Vincent’s self-portrait on Monday, made just after he cut his ear after a fight with Gaugin. Tuesday, the last day, has been selected for the “Wheatfield with crows”. For a long time this was thought to be the last painting by the artist.

On Vincent Van Gogh’s birthday, Willem van den Berg dug up some of the home ground in van Gogh’s birthplace Zundert. On his 125th anniversary of his death he gathered some well water – also in Zundert – and bottled this in sealed glass “watertubes”. The container with sundried home ground is sealed as well.

The parish garden in Nuenen has been renovated by a parish garden oroject group in the 2015 anniversary year. An vista has been made in the garden by the pond where the artist liked to stay. The Projectgroup has officially handed the prunings coming from this vista to Willem van den Berg in the summer of 2015. An exclusive wooden fountain pen was made out of this 130-year-old beechwood and comes with the Van Gogh watch.

The watch is presented with a 19th century paintbox along with van Gogh’s home ground, spring water, prunings with certificate, waterdocument, certificate, guarantee certificate, Gilde certificate of the Dutch Gilde van Goudsmeden with Gilde hallmark number, a handmade pearwood watchbox matching the example of the antique paintbox and a larger storage box in which both boxes can be stored.

The numbers on the dial are engraved in Van Gogh’s handwriting, re-drawn from his letters. The hands are brushes of which the minute hand gracefully rests on Vincent’s hand. Inspired by a famous painting Gauguin made of him. The second hand has the shape of a blossom that is also found on the dial, inspired by Van Gogh’s Almond Blossom painting which he made for his brother Theo on the occasion of the birth of his first child. The silver-pierced dial is seated on a background of blued steel. His autograph is engraved on the side of the case. The bottom of the case is fitted with a white-gold plaque with van Gogh’s self-portrait along with his grey trilby hat. Beneath this is a section containing a sealed package of native ground with the coordinates of where it was taken, along with the date of the anniversary. His love for farmer’s life fits in with the horse-leather strap of a Van Gogh watch. 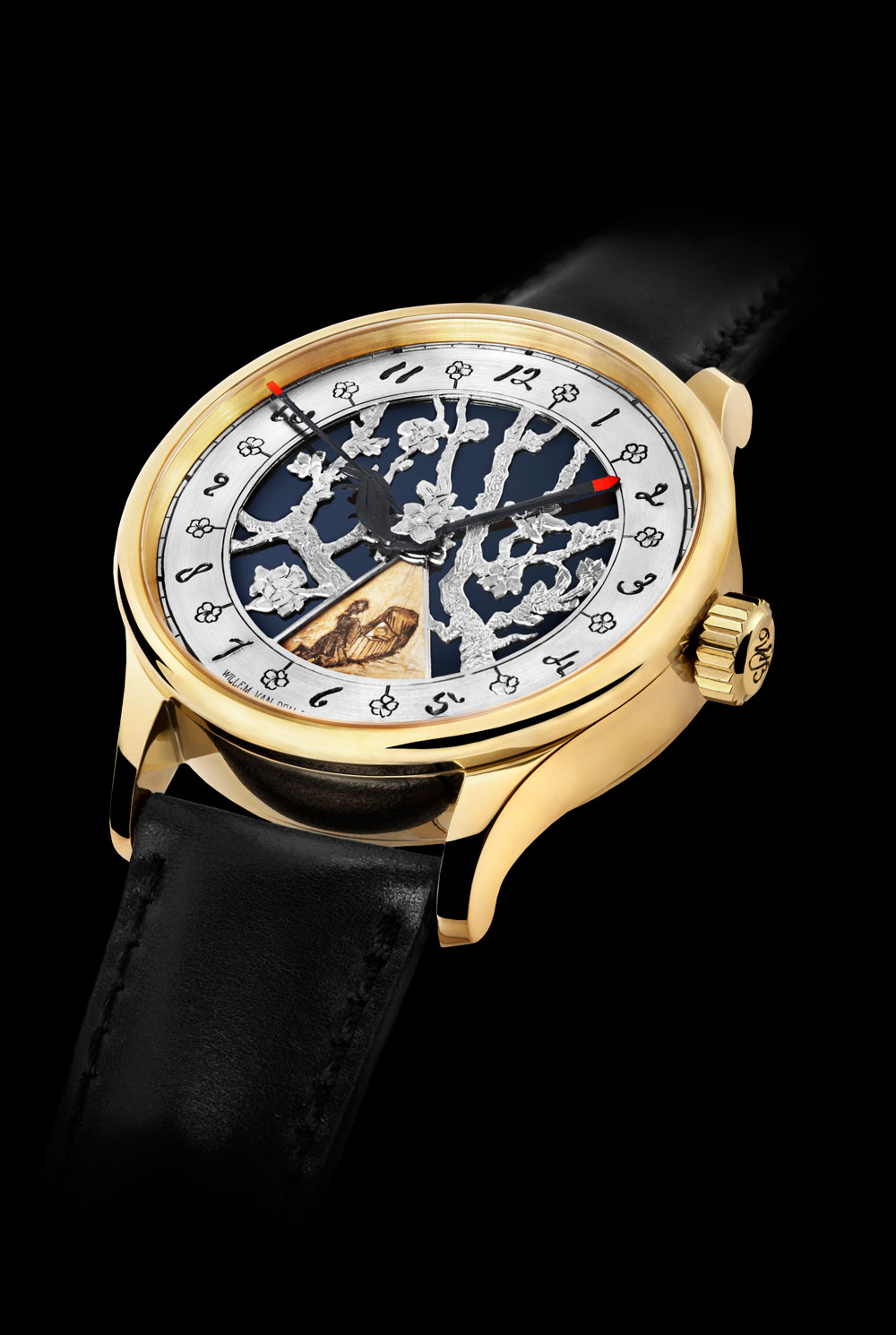